No, I haven't made another pair of trousers (yet!). This time it's the blouse! 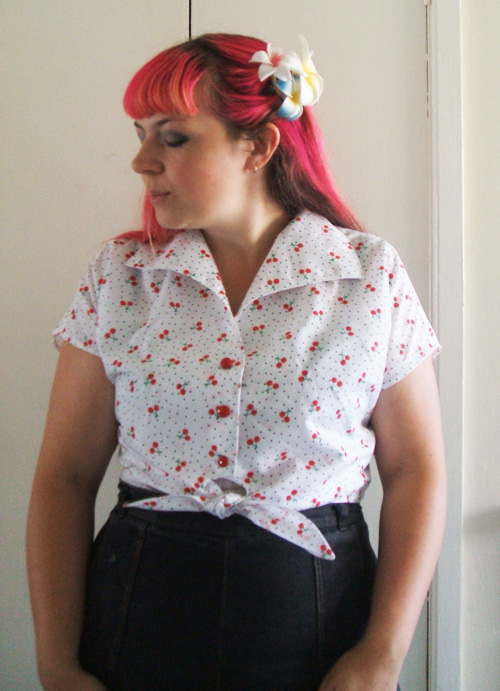 On my last shopping trip I picked up a length of this cherry print polycotton with the intention of making the tie-front blouse from Butterick 5895. Between a lack of sewing mojo brought on by the hot weather and the necessary machine maintenance it got put off for a while, until I decided to tackle it last week.

The first dilemma was choosing which pattern size to cut. This thing has a full 7" of ease built in at the bust, which on one hand seems rather excessive, and on the other is part and parcel of the style of blouse: being a kimono sleeved blouse usually means more ease around the upper body. I went with it and cut the size I normally would, working on the idea that side seams are easily taken in if need be.

That plan was scuppered the moment the iron came near my fabric though. Holy crap I have never seen polycotton shrink so much under heat! Often polycotton fabrics are either pre-shrunk, or they just don't because of the nature of the fibre content. Not this one, though. I lost a good inch in length off my side seams, so goodness knows what I lost off the bust measurement. Suddenly I'm glad of that excess ease! And the adjustable nature of the waist. It does mean it's come up a bit short though thanks to the vertical shrinkage. Even taking that into account, I think I might lengthen it an inch next time. It's riding a little higher than I'd like.

So, I still have no accurate idea how this pattern actually fits, other than I can probably cut a size smaller next time. 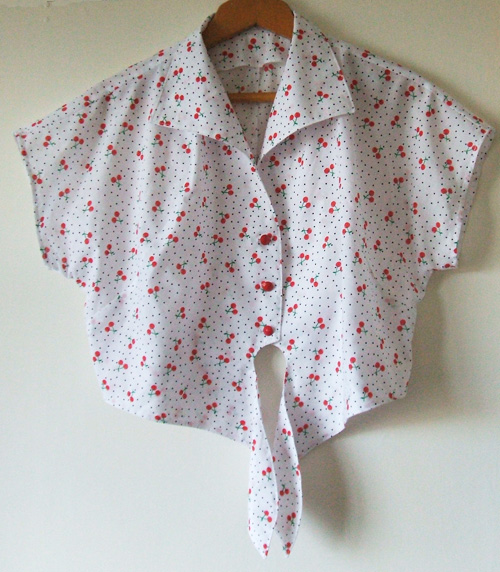 For the most part the construction was fairly simple. I omitted the interfacing in the ties to reduce bulk, stopping it at the bottom of the button band instead. The only issue I did have is with the collar at the back neck area, which ended up looking like this at one corner: 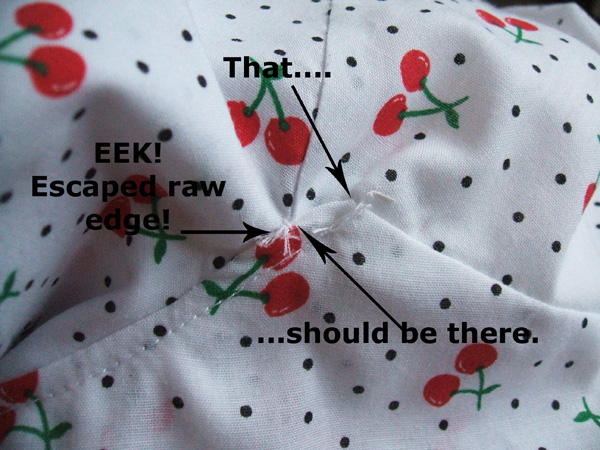 Partly my own fault, partly that of the instructions. One step has you "clip to the small circle" in the corner of the neckline, which the collar is later inserted into. It does not, however, make it clear which of the TWO circles it means, and I'd forgotten to mark them anyway. So, it was a bit of a guess where I was snipping to. Accuracy is a necessity when attaching this collar! At least I'm not alone in this though. Just about every blog post I've read about this blouse mentions trouble with the collar and facing.

I chose some facetted plastic buttons in a red shade to match the cherries. As usual, I ignored the directions for button placement, and only used three!

1. Do a pressing test. Don't trust that your fabric will be fine under the iron!

2. Pay more attention when transferring markings. That dot was NOT just the top of a dart.

3. Use a pressing cloth when working with white fabrics. Or clean your iron more often. Hehe.

4. Do not take photos with a small child around. You get photobombed. Repeatedly. 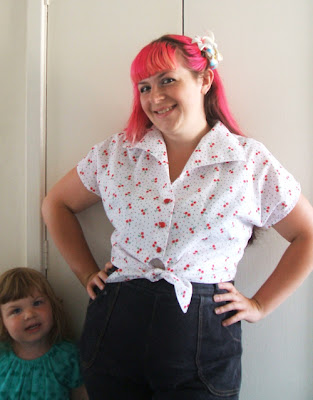 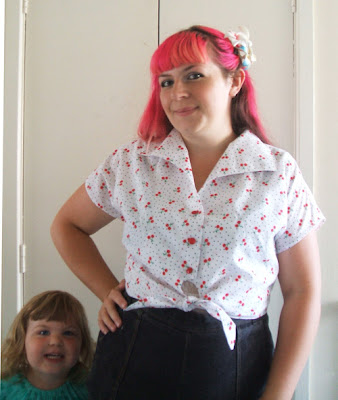