Hollywood movie starlets from the 1930s are generally acreditted with starting the daily wear of trousers as a fashion trend rather than something worn as an (often scandalous) necessity for manual jobs as it had been previously.

Fabulous Marlene Dietrich, who wore male styles in her film roles of the early 1930s, and carried the style into her off-screen wardrobe: 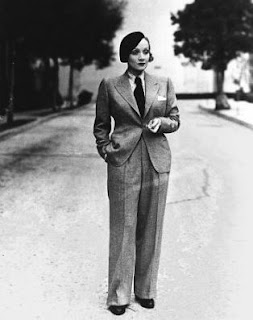 ﻿﻿﻿
The other most well known trouser-wearing actress of the period was Katharine Hepburn. In her style we start to see the relaxed, more feminine tailoring as she pairs wide-legged slacks with simple blouses and open jackets. Her comfortable poses in these images help with this of course! 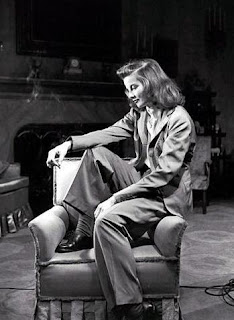 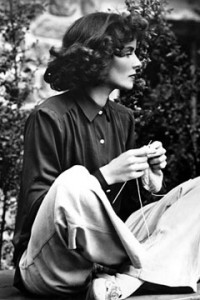 During the war years, as women took on the roles of those men gone to fight abroad, the role of trousers in many women's wardrobes turned to workwear.  Taking on jobs ranging from farming through to engineering and munitions manufacture, women needed work clothing that was hard﻿wearing, unrestrictive and protective.

This set of images from New Vintage Lady  shows a variety of styles and fabrics in trousers for work and everyday wear, including different cuts of overalls, and the introduction of denim in womenswear. 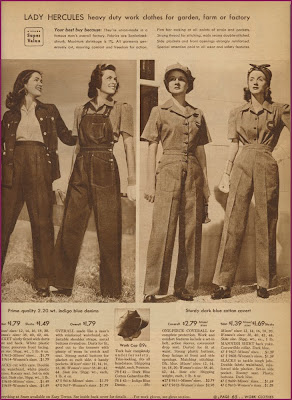 Denim jeans quickly found their way into the everyday wardrobe, particularly amongst teens and younger women. Amy Jeanne of It'll Take The Snap Out Of Your Garters has an interesting post looking at the trend of jeans and T-shirts in the '40s, something we often think of as a much more recent trend. ﻿ 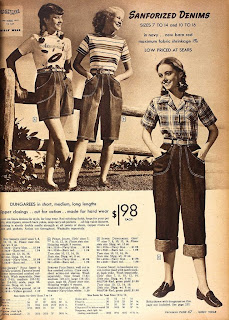 Cropped jeans and printed T-shirts, 1948
﻿
I've now decided to make up my trousers as jeans. Cue pattern alterations for pockets and turned up cuffs!

Next up: Tips, Tutorials and Makes from around the blogosphere
Posted by Ginny at 15:12