Readers who have been with me for a while may remember the series of posts I began on making 1940s style trousers way back in February. You might have wondered what happened there. Well, I finished up the planned project from Simplicity 2654, in a soft black cotton twill with black buttons on the pleats, sailor-style. I loved them, wore them and washed them. And shrank them. Drat. I was so annoyed; hours of work ruined by something so simple before I even had a chance to get photos to prove their existence. Yes, I had even pre-washed the fabric before making them, but obviously one wash wasn't enough!

Come forward a few months to September, and my last shop-bought jeans finally gave up the ghost. The high-street shop I used to buy my (relatively) well fitting and cheap jeans from has changed their slopers recently so they fit as badly as any other pair: too slim in the thigh and low rise. Ughh. On my last trip fabric shopping I picked up some denim ready to finally make my own jeans. On a side note, I had the project put off even further by the fact that the girl cut my fabric a metre short and I failed to notice until I got home three days later and over a hundred miles away. Mum to the rescue with a trip to get my forgotten metre and post it out to me. Thanks Mum!

After all the hype I've read around the blog world about Simplicity 3688, I decided to get myself a copy for these jeans. I wanted a waistband rather than the faced waist of 2654, and I was hoping for an easy make with as little fitting trouble as possible, which the reviews of this one promised.

All those other bloggers were so right! The one change I made to the flat pattern was to add 1.5" to both the front and back crotch depth since I have such a high waist, then whipped up a quick thigh-length toile from an old sheet. Perfect fit straight off! I cut my denim immediately, and began sewing today. 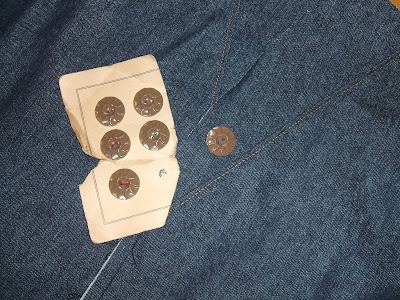 I've added hip pockets, with a straight diagonal edge for the pocket top. I plan on making them with a button closure, mainly because I don't want to wait for a zip to arrive in the post. I'm not particularly keen on the colour of these buttons, but they're the best I have. Ideally I'd wanted either a nice dark red or mother of pearl, neither of which I have in the appropriate size. I can always change them at a later date I suppose. 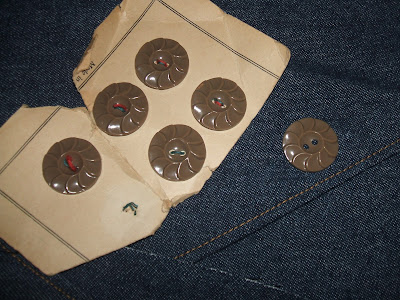 I'm using gold cotton for the topstitching, a vintage thread that came from my Nanna with her sewing things. I'm hoping to get the majority of these done tomorrow. I want my jeans!

Here's a recap of the previous posts from the series: