Underneath It All: More Knickers and competitive sewing

I haven't forgotten my lingerie series! It fell by the wayside a little while I did my pre-Christmas sewing and making, but I've made a few pieces.

I made up a couple more pairs of the high-waisted knickers, with a couple of fitting tweaks to the pattern along the way, including dropping the top edge down a little. There is a pair to match my spot camisole made last year, and a pair made from the scraps of my Christmas Day dress. The ponte knit makes for nice warm undies! 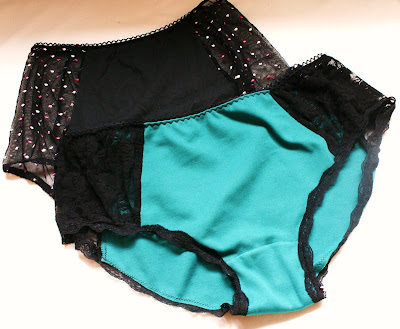 I also drafted a pattern vaguely based on the shape of an old pair of bought knickers that I liked the fit of, and made up a couple of pairs from this. Both pairs are made from leftover bits of viscose jersey from t-shirt projects, with the very last scraps of stretch lace on the side of the red ones. This pattern is just a two-piece front and back design (modified to include the lace side panels) so is super quick to make. The striped pair were done start to finish in about 20 minutes! 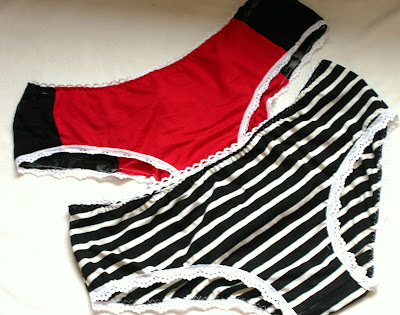 Now I really need to stock up on stretch lace edgings. The white ones had been in my lace and ribbons bag for a good four or five years without being touched, but now I'm on the knicker-making spree I've used almost all of them!

On the subject of lingerie sewing, have you seen the competition hosted by Mrs Depew and Ohh Lulu? They are offering prizes for the best garment made from the patterns used in last years sewalong: the French Pin-up Bra, Corset Garter Belt, and Betty knickers. 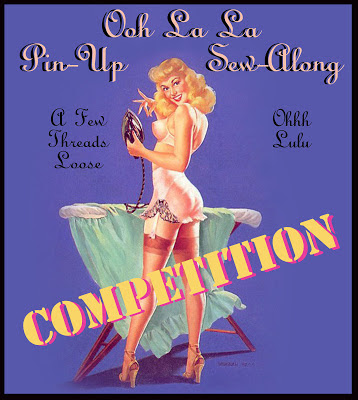 I worked on the longline version of the bra at the time, but ran into a few fitting issues that showed up along the way and never finished it. I think I'm going to start from scratch with another toile to address these, then make up another version. Luckily I have plenty of the fabric left for more attempts!