Blogging may be a bit hit and miss for a while around here, possibly for the next couple of weeks or so. "Why?" you ask. Well, yesterday afternoon this happened: 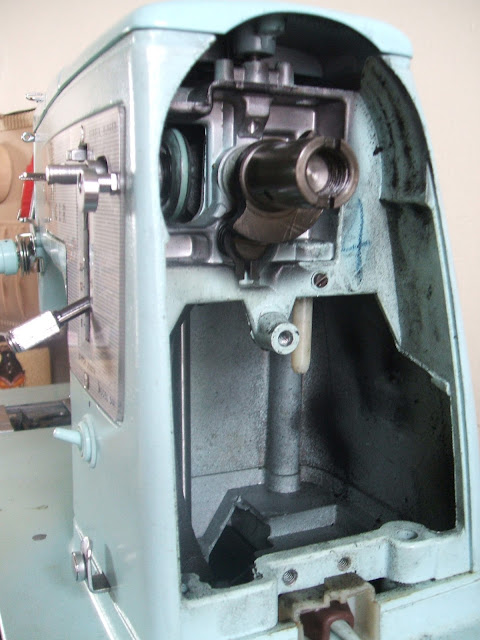 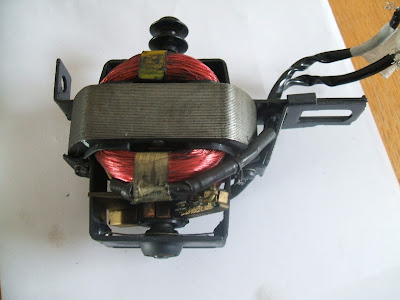 Yep, that's my machine with her heart ripped out! For the first time in my seven years of ownership she's in need of some major maintenance. The last couple of months she's had some major issues that I just can't ignore any longer. She'd lost speed control on the motor, having intermittent spells where a light touch of the pedal produced full speed with nothing in between for a few hours of sewing, followed by twenty minutes of normal sewing, only to return to her pedal-to-the-floor speed. On top of this the drive pulley (the little wheel at the top of the second picture which the drive belt goes around to make the handwheel move) has been slipping on its shaft when sewing at high speed. Oh, and there's an awful lot of carbon dust lurking around on the motor and in its housing, so chances are the carbon brushes are worn down and need replacing. It had got to the point where it was annoying me so much that I didn't even want to sew, so I guess that's as good a time as any to take her off the table!

If all of this technical stuff has gone right over your head, don't worry! It all basically means that I'm off to buy a new foot pedal, the most likely cause of the lack of speed control, and spend some time tinkering with a very grotty motor.

I'll try not to let it get too quiet over here. I have a couple of unblogged things I could share, and no doubt I'll have to find something crafty to keep my hands busy. If I get desperate, there's always boyfriend's mum's sewing machine!
Posted by Ginny at 10:34